Introduction to nurseries for hatchery produced oyster spat
This information is an introductory guideline for farmers interested in operating field nurseries for ongrowing of small (0.75 mm - 1 mm) ex-hatchery oyster spat. It is not intended nor should be used as a manual.
Spat supply from the hatchery
Irrespective of the species of oyster (Sydney rock, Pacific or flat), the larvae are about 330 - 350 microns (1000 microns = 1 mm) in shell length when they settle and transform into spat (juveniles). Newly settled spat (Figure 1) are usually held in the hatchery for a week or more until they are large enough to be retained on a 500 or 1000 micron sieve. 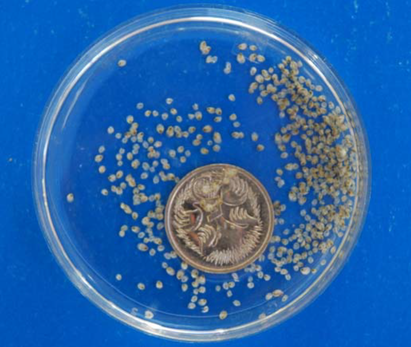 There are now several well-run nurseries in NSW, we strongly recommend visiting a nursery near you to see the systems first hand, discuss their operation and appreciate what is involved.
Hatchery spat webinar wednesday 22 september 2021 zoom recording
Spat availability
QX resistant spat EOI
Hatcheries
Wild-caught spat directory
Information on the availability of Pacific oyster and flat oyster spat is not currently available